Exceptional Award for Working in Partnership 2012

On Tuesday 12th March 2013, Wiltshire Council held its annual Gala Awards Dinner. This is a grand occasion where the Council recognises the achievements of its staff in the previous twelve months. It was held in the atrium of the newly refurbished County Hall in Trowbridge. 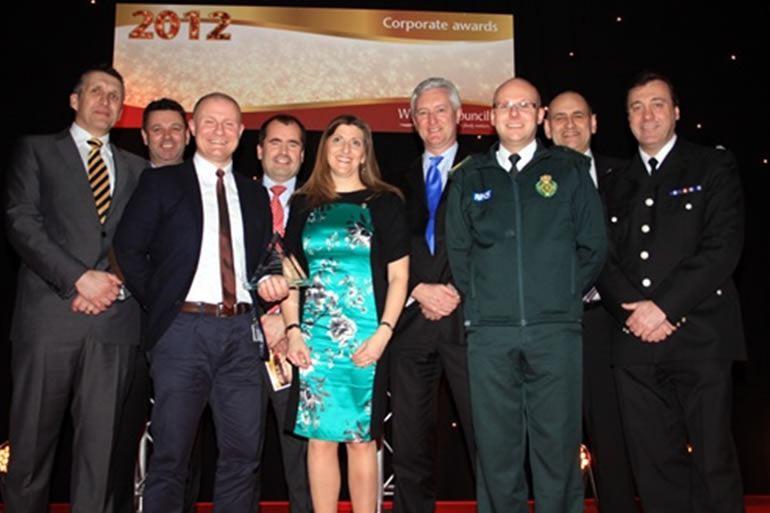 Hitherto, this occasion is reserved exclusively for the work of the Council and its staff, however, this year broke with tradition because of the unique nature of 2012 – ‘the year of celebration’. Much of the evening was devoted to looking back at the delivery of a safe, secure and successful Olympic Torch Relay and evening event in Salisbury. Wiltshire was the only part of the UK to host the Olympic Torch twice – the Torch visited north of the County in May and travelled through the south in July.

Although Wiltshire Council hosted the Torch they did not do so alone and the events could not have taken place without the support of partners. The partnership response was coordinated by the Wiltshire & Swindon Local Resilience Forum (LRF) which is a collective of Category 1 agencies including Police, Fire, Ambulance, Councils, Health and the Environment Agency. Staff from all agencies played a significant role in months of meticulous preparation, including producing plans and exercising them beforehand.

The work of colleagues from other organisations was rightly recognised when Wiltshire Council broke with tradition for the first time and presented them (non Council staff) with the Exceptional Award for Working in Partnership 2012.

Mike Veale, Chair of the LRF said “Some people question the value of partnership working but this is a fine example of where it works well. There is no way that Wiltshire could have delivered such a huge event without the support of partners.”