On Thursday 13th September 2017, local agencies including Wiltshire Police, Dorset & Wiltshire Fire and Rescue Service, South Western Ambulance Service and Wiltshire Council conducted a ‘live’ exercise with colleagues from the Atomic Weapons Establishment (AWE) at Aldermaston called ‘Astral Bend’. This was a full day and took place at MOD Lyneham, and was based around a simulated emergency during the air transport of Special Nuclear Material, which led to a simulated release of radioactive material. Fire trays and smoke generators were used as part of exercise activity to add realism to the scenario.

Exercise Astral Bend 2017 is part of a routine programme of exercises and does not imply any increased likelihood that a real nuclear emergency could occur. There has never been an emergency involving Special Nuclear Material which has led to, or come anywhere near leading to, any release of radioactive material to the environment. The aim of the exercise was to test the MOD response in the extremely unlikely event of an emergency during the air transport of Special Nuclear Material. The response to such an emergency would involve local emergency responders.

In the very unlikely event of a severe emergency involving Special Nuclear Material, which leads to a release of radioactive material to the environment, the principal risk to the public in the vicinity would be from inhalation of airborne radioactive material. Members of the public would be provided with appropriate medical advice from professionals to mitigate any hazard.

The following two days, Wiltshire Police exploited the opportunity presented by the exercise set-up to exercise and train their Disaster Victim Identification (DVI) and recovery process. This ensured a sensible and responsible use of resources meaning that local agencies did not need to fund a separate exercise to test their local capabilities. They were able to use the same facilities that had been provided by AWE for Exercise Astral Bend. 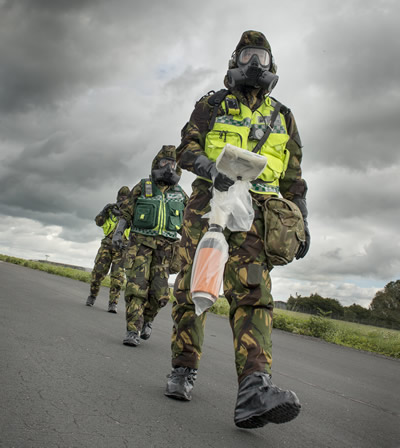 Environment Agency field operatives will roll out up to 120 metres of temporary defence barriers, in partnership with officers from Dorset & Wiltshire Fire and Rescue Service (DWFRS). This will be the first joint exercise of its kind in the South West, although the fire service has previously helped deploy barriers during live incidents.

The exercise will take place at the Ashley Road recreation ground, next to the River Avon, from 10am-1pm. Teams will deploy three types of barriers and seepage pumps to practise their joint response to flooding.

Robbie Williams, Environment Agency Operations Manager for the Wessex Area, said: “We are investing to reduce flood risk in Salisbury as part of a £2.5b investment nationally to better protect 300,000 homes by 2021.

“Salisbury is at risk from flooding from five rivers running into the city and their close proximity to homes and businesses, so it’s important we limit the overall impact and extent of flooding, and keep people safe.

“Joint exercises like this will help us be better prepared for any future incidents as we’ll be able to deploy the barriers more quickly and efficiently when flooding is expected, helping to protect communities and the local economy. “

Jason Moncrieff, DWFRS Station Manager for Salisbury, Wilton and Amesbury, said: “Across our area, Dorset & Wiltshire Fire and Rescue Service has a number of communities at high risk of flooding. It is great to have this opportunity to work closely with Environment Agency colleagues, both to test how we can support them when flooding is expected, but also to better understand how they work and the defences they have available.”

The exercise site is one of four areas in the city where temporary defence barriers would be deployed in a real life river flooding incident. 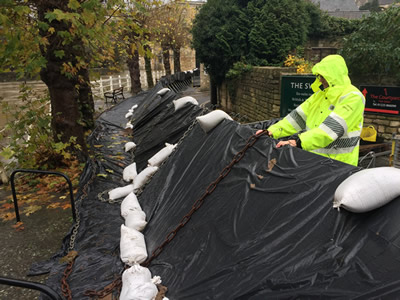 These measures are supported by the Salisbury Operating Flood Working Group, which launched a multi-agency flood plan outlining the city’s emergency response last year. Volunteer wardens were also recruited by Salisbury City Council to act as the eyes and ears of the community for any flood risks.

Partner agencies and some schools have been invited to observe the exercise, including Wiltshire Council, Salisbury City Council, Wiltshire Police and wider members of the Wiltshire & Swindon Local Resilience Forum.

One of the Agency’s new Incident Command Vehicles will also be on site recording footage of the exercise. The Wi-Fi-enabled vehicle acts as a mobile incident room and a temporary headquarters for staff out in the field, enabling better site management, situational awareness and visibility in flood risk communities.

Local residents will be informed about the exercise in advance and invited to stop by to find out more. Ashley Road and the formal footpath around the edge of the recreation ground will still be accessible to users.

Residents can sign up for flood alerts by phone, email or text message. To register go to www.gov.uk/sign-up-for-flood-warnings or call the 24-hour Floodline on 0345 988 1188.