Exercise Selfridge replicated a ‘survivable air crash’ and included search & rescue teams operating on both land and in water, rescuing casualties and managing the wider implications of a major incident.

Wiltshire FRS deployed crews from Cricklade, Stratton and Westlea Fire Stations, together with a specialist water team from Stratton. Wiltshire Police deployed a disaster victim identification team. This team would be used to recover deceased people in the event of such an incident.

On Wednesday 9th/Thursday 10th October over 250 people from 20 different agencies came together to test local resilience in the face of a disaster in a two day table-top exercise that has been over a year in the planning. Exercise Red Kite was a scenario based on two military aircraft out of Boscombe Down colliding in mid air above the Porton Down establishment and nearby villages. The resultant crash caused casualties and damage over a wide area including large fires and the release of deadly chemicals and toxins, as well as affecting the nearby Salisbury to London rail line with a stranded commuter train filled with passengers. It tested how the agencies work together in the face of such a catastrophic incident. 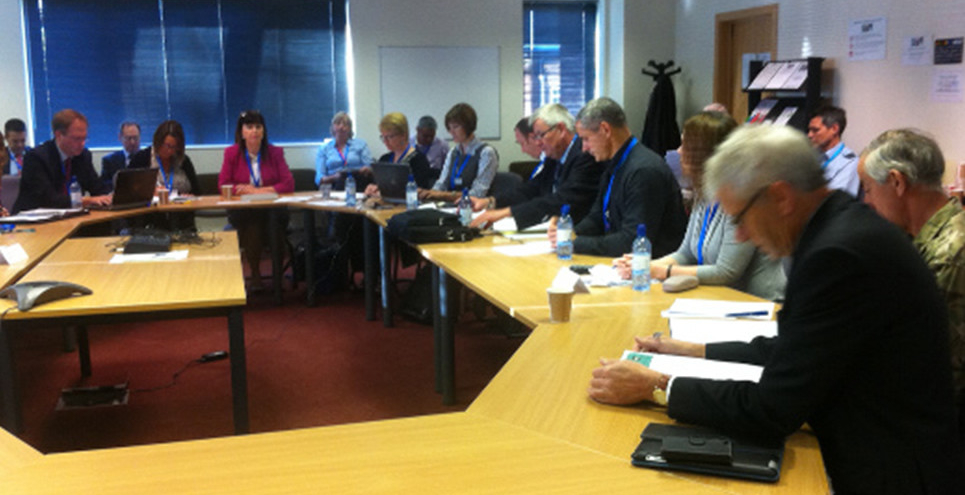 The event was a command post exercise which is a fully simulated interactive activity, which tests the capability of an organisation to respond to a developing simulated event. It is designed to require a coordinated response to an incident in a time pressured situation. It tests the capability and adaptability of organisations at strategic and middle manager levels. Day One of the exercise was focussed on the response and was led by Wiltshire Police. Day Two focussed on Recovery some seven days into the incident and was led by Wiltshire Council.

Emergency planners, who form part of the Local Resilience Forum (LRF), worked together for over a year planning the exercise. They were supported by the Emergency Resilience Division of Public Health England who have expertise in delivering worldwide exercises based on major incident scenarios. It involved some of the most senior decision makers in Wiltshire and Swindon. They were based at Police Headquarters, Devizes and formed a Strategic Coordinating Group (SCG). Their purpose was to set the strategy for dealing with the incident. Exercise Control was based at the Wiltshire Fire & Rescue Service Training and Development Centre in Devizes which also contained subject matter experts and a pseudo media cell containing real reporters.

A major incident is where one agency or more would be severely impacted (ie: hospitals or Ambulance Service) or where there is mass fatalities, casualties or disruption to normal services. As part of ensuring that the emergency services response is coordinated with all other agencies involved, the exercise put them to the test with this ‘fake’ scenario playing out in ‘live’ time. Players in the exercise were given real time ‘injects’ across the two days and had to make crucial decisions in the management of the incident. Senior decision makers had a group of scientific experts on hand to advise them on the potential dangers to the public. This group is known as the Scientific Technical Advice Cell or STAC. As part of the command and control structure, other key commanders were based at Boscombe Down Airfield and formed a Tactical Coordinating Group (TCG). Their purpose is to determine the tactics to deal with the incident and direct operational staff at the scene.

“This exercise was over a year in the planning and was extremely complex. It was a tabletop exercise and there was no real operational ‘play’ this year, so the public didn’t see a mock incident anywhere. Exercise Red Kite brought together some of the most senior decision makers around the table and working together – as they would if a major incident occurred in Wiltshire.

Although it is highly unlikely that a major incident of this kind would actually happen in Wiltshire and Swindon, it is really important that we are able to test our plans as part of mitigating the risks that we do have.

The exercise scenario was kept secret from all the players who only found out what it was as the day developed. The exercise enabled us to put our emergency plans into action and for agencies to respond in a coordinated way. We will now be debriefing the two days and review how we all responded. Any learning will be incorporated into our plans to ensure that they are up to date and fit for purpose.“ Mike Veale, Deputy Chief Constable of Wiltshire Police and Chair of the Local Resilience Forum said “It is really important that local agencies get together to test and exercise their plans. We live in an uncertain world and major incidents do happen. Thankfully, they are relatively rare in Wiltshire and Swindon, but we cannot be complacent and have to be ready to respond if such a situation occurs. Exercise Red Kite was a really good opportunity to test our readiness.”

The following agencies were some of the key organisations that took part:

Following on from Exercise Red Kite in October, Friday 6th December 2013 saw the Local Resilience Forum (LRF) again testing its response to a major incident in a joint exercise with the Ministry of Defence (MOD) at MoD Corsham.

This was also an opportunity for MOD Corsham to test their own internal contingency plans and local agencies worked in conjunction with staff at the recently refurbished MOD site in order to do so.

The exercise, code named Operation Rush, had some ‘live’ play involving a simulated fatal road traffic collision which affected some of the site’s infrastructure and played out in ‘real’ time. The exercise involved simulated fatalities and casualties in the wreckage of a 7.5 tonne truck and a minibus.

The organisation Amputees in Action took part to add realism to the scenario, and to assist medics in assessing how to deal with casualties who may have been seriously injured. Between Exercises Red Kite and Rush, local agencies across Wiltshire and Swindon had to mobilise in response to Storm St. Jude in October and deploy to a large fire at Cheyney Manor Industrial Estate in Swindon at the end of November. These incidents serve to reinforce the need to train and exercise together.

The exercise focused on response and rescue in the morning, with the afternoon being a tabletop scenario bringing tactical commanders together to examine their response with wider consideration around recovery. Participants were required to decide what needed to be done to bring the site back to full functionality and the local community back to normal. Wiltshire Council also used the exercise to test its Rest Centre plans. Emergency planners, who form part of the LRF, worked together with colleagues from the MOD for over ten months putting the exercise together.

A major incident is where one agency or more would be severely impacted (ie: hospitals or Ambulance Service) or where there is mass fatalities, casualties or disruption to normal services.

“Wiltshire has a number of MOD establishments across the county. This was a good opportunity for partner agencies to test their response to an incident and work with colleagues from the MOD to ensure that we understand what is required and the capabilities of each organisation. It is always good for us to exercise our plans and learn lessons for the future.”

Mike Veale, Deputy Chief Constable of Wiltshire Police and Chair of the Local Resilience Forum said “Exercise Rush was another chance to test and exercise our plans and we enjoyed working with the MOD . Thankfully, major incidents are relatively rare in Wiltshire and Swindon. However, the Local Resilience Forum regularly works together for incidents such as flooding, adverse weather or any incident where more than one agency is involved, and October’s Storm St. Jude is a good practical example of this.”

Further information about Amputees in Action can be found at