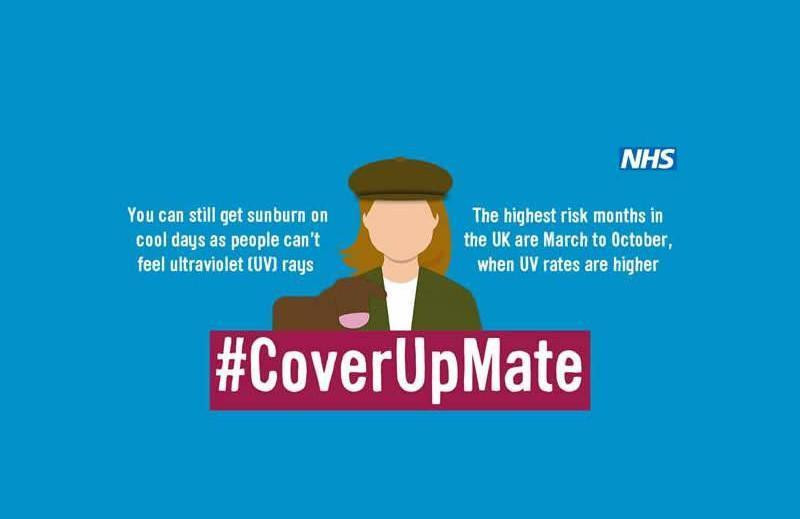 As the South West gears up for summer, people who work outdoors are being urged to cover up against harmful UV rays.

Health experts today have launched their skin cancer campaign “Cover Up, Mate”, aimed at agricultural and construction workers, gardeners and sports-players – who may find themselves outside longer during the summer months and often don’t use sun cream.

NHS England and NHS Improvement warn that exposure to greater levels of UV, can lead to an increased risk of skin cancer in the South West.

Judith, a Beef Farmer from Somerset shares her first-hand experience of being diagnosed with basal cell skin cancer (BCC), the most common type of skin cancer. “I was always aware of protecting myself in the sun, but I probably didn’t cover up as religiously as I should do. Sometimes it is freezing cold when I start my day, and it’s the last thing I would think about. Over time I noticed, what started off as a little white spot on my chin and gradually it began to grow. My GP referred me to a specialist and they immediately diagnosed me with skin cancer.”

Luckily like many people across the South West, Judith spotted the signs of what could have been fatal. The latest statistics show that ‘early stages’ of diagnoses of malignant melanoma in the South West are 88% female and 86% male which is higher than the national average across England. Unfortunately, not all cases are able to be treated and in 2016 mortality data in the South West showed 168 male and 113 female deaths due to skin cancer.

Over the past five years (from 2013-2017) we have seen more people diagnosed with skin cancer in rural areas of the South West such as Devon, Cornwall and Somerset compared to predominantly urban areas like Bath, Swindon and Bristol.

NHS England South West Medical Director, Dr Michael Marsh said: “You can’t feel UV radiation, so it’s very easy to get sunburnt in the UK, even when it’s cloudy and not particularly warm. Sunburn increases the likelihood of skin cancer so its important people take more care, especially those who work outside or take part in outdoor sport.”

Official NHS advice on staying safe in the sun is:

Debbie Stark, Deputy Director of NHS Healthcare at Public Health England, said “Although exposure to some sunlight is good for boosting vitamin D levels, people should not overdo it. People who spend more than 15 minutes in the sun on any given day, should apply sun protection factor 15 or higher,” she said. “A suntan is your skin’s way of trying to protect itself from too much sun. And a sunburn is a clear sign that your skin has been damaged.”

Following Judith’s skin cancer experience, she shares her thoughts on the importance of covering up in the summer months. “Now I make sure I apply your sun cream before I go out, irrespective if the sun is shining or its raining. You can bet your bottom dollar that later in the day the weather will change, and I always make sure to reapply at lunch time.”

The earlier skin cancer is caught, the easier it is to treat, so see your GP as soon as possible if any moles or freckles change size or shape.