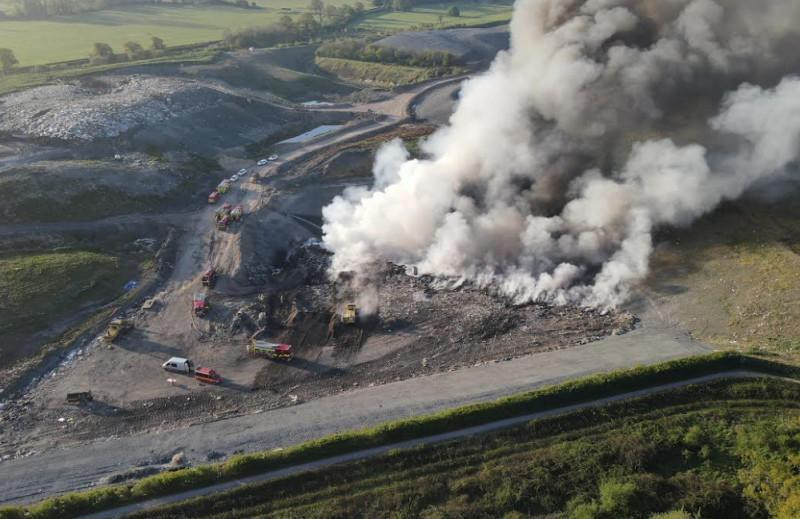 Dorset & Wiltshire Fire and Rescue Service was called to the landfill site in Compton Bassett, near Calne at 5.05am this morning (27 April), following reports of a large waste fire.

Fire crews were mobilised to the scene from Calne, Devizes (two), Chippenham (two), Melksham and Trowbridge along with the Environmental Protection Unit from Gillingham, two water carriers from Wilton and Pewsey and the Command Support Unit from Stratton (approx. 40 firefighters).

On arrival, crews found approximately 40,000 tonnes of low-grade clinical waste and general household waste involved in fire, as well as an additional 2,000 tonnes of tyre bales, and a significant smoke plume, heading towards the south of Calne.

Firefighters are making good progress by working alongside the site contractors to smother the fire with soil.

As of 9am this morning, the incident has been scaled back to three fire engines and one water carrier. Plans will be formulated as the morning progresses to fully extinguish the fire which is likely to continue into the later part of today.

We are advising local residents to keep doors and windows closed due to the smoke in the area. As this fire will be ongoing for a number of hours we will update the public with any concerns regarding the smoke should they arise.

Read more about Fire Safety in our Knowledge Base

Visit the Hazard House online to learn about fire safety

Dorset & Wiltshire Fire and Rescue Service has launched an updated version of its online Hazard House, a 360° virtual tour that highlights the importance of fire safety.